A medical breakthrough 4,000 years in the making

Michael Schmidt, Ph.D., looks you right in the eye and asks his question. Yes, it’s hypothetical, but that’s beside the point because it’s a good one.

“Let’s say that every day a commercial airliner crashed and all the passengers on board died.” He pauses to let the question hang for a moment, before continuing: “Would you be willing to book a flight?”

The MUSC researcher doesn’t wait for an answer, because he doesn’t need to.

“Of course you wouldn’t,” he said. “Government regulators, industry, the public – they’d all scream at the top of their lungs until something was done to fix the problem.”

He poses this question not to freak people out about air travel but, rather, to make a singular point: Every day in the U.S., hundreds of people die from health care associated infections (HAIs), and yet, we still haven’t found an easy and cost-effective way to reduce them. According to the National Institutes of Health, approximately 2 million Americans develop HAIs each year, and nearly 100,000 die from them. The resulting economic burden is believed to be as high as $45 billion per year.

Though there are scores of smart people on the planet working to figure out ways to reduce the numbers, Schmidt and his MUSC collaborators, Cassandra Salgado, M.D., Robert Cantey, M.D., and Joseph John, M.D., think they might have found the simplest and most elegant solution of them all: copper.

That’s right. The answer is right there in the long-forgotten old penny lying on the sidewalk.

Most people know copper is used in electrical wiring, but beyond that – that’s about it. The reason copper is so good for wiring just happens to be the same reason that it’s good for fighting infections, Schmidt explained.

“The way copper kills … it’s a little squirrely. First you invoke quantum mechanics and then people’s eyes glaze over,” he said with a laugh, “but on the most basic level, copper short circuits the process of replication of the germ, and the cell dies very quickly – within nanoseconds.”

For the science buffs out there, Schmidt is happy to elaborate, detailing how the waste from bacteria manifests in the form of electrons. When a microbe puts out that waste, it also has to send out a proton with it.

“Copper is more than happy to take those electrons, and the proton is orphaned, unable to return,” he said. This phenomenon is known as oxidative stress, the very same thing that is at play in aging and cancer.

“Only with bacteria and copper, it’s happening much faster,” he said.

This concept isn’t exactly new. As far back as 2000 B.C., people used copper to purify water and treat wounds. Ancient Phoenician sailors used to put copper on the outside of their boats to prevent barnacles from forming. And farmers in the 18th century used it as a fungicide. So while the 10 years or so Schmidt has been championing copper and conducting his study may seem a mere sliver of time in the grand scheme of things, much like innovators before him, Schmidt continues the legacy of transforming the use of copper to advance the health of humanity.

In his latest study – which was recently published online in Applied and Environmental Microbiology – Schmidt and now-retired MUSC microbiologists Hubert H. Attaway and Sarah E. Fairey looked at more than 60 beds in the intensive care unit at Highpoint Health in Indiana over the course of a year.

“From a microbial perspective, the bed is the most significant object in the hospital room,” he said. “The patient’s in it. People come in and sit down on it. It’s a bacterial playground.”

This study builds upon his findings from a key 2008 study where he and his team were able to cut the rate of HAIs by 58% using copper on key areas of beds. This more comprehensive study leaves him convinced that a completely copper-encapsulated bed would protect patients even better.

Rarely is good data a bad thing, but Schmidt and his colleagues wondered if their findings might be viewed as too good to be true.

“Honestly, it would have been to our advantage if we only lowered it by 10%. People would have believed it more. It sounds weird, but in a way we were actually too successful.”

But the Department of Defense, which funded the original study, enlisted the help of the Library of Congress and Environmental Protection Agency to review all the data and together they determined their science was sound.

But now begins the harder part: getting the buy-in from the health care industry at large.

“The dirty little secret of hospital beds is they cost more than a Mercedes,” Schmidt said. “Getting facilities to buy new ones is a tough ask.”

But at one of Schmidt’s many international talks on copper’s benefits, which include a TEDx talk on the subject, one of the owners of Bed Techs, a bed refurbishing company, heard him speak and was immediately sold. The owner then went back to his engineers and asked them to figure out a way to make a copper spray 12 microns thick – enough to maintain the benefits of copper – that could be used to coat the beds. That way, he thought, hospitals wouldn’t have to buy brand new beds. For around $2,000 apiece, a fraction of the cost of a new bed, Bed Techs could copperize them.

According to Schmidt, the typical lifespan of a hospital bed is about 10 years. With that timeframe in mind, to copper retrofit a bed would cost a hospital around $1 a day, per bed. According to the NIH, just one HAI costs a hospital approximately $43,000. The average room will have upward of five infections per year. That means that for a few hundred bucks each year the hospital is preventing over $200,000 in incurred costs. Just in that one room.

“So now we wait and see if folks start lining up,” he said. He knows the medical industry can sometimes be slow or even resistant to change, but he’s buoyed by some initial sales of the manufacturer’s refurbished copper beds.

“The trick was in how to apply it,” Schmidt said. “But they figured out how to make it stick. Now, when it’s on there, it’s as good as the original God-fearing metal.”

Schmidt said he’s hopeful that this trend – one roughly 4,000 years in the making – is finally about to catch on.

“I really do think this is a game changer,” he said. “And it’s just a matter of time before others get on board.” 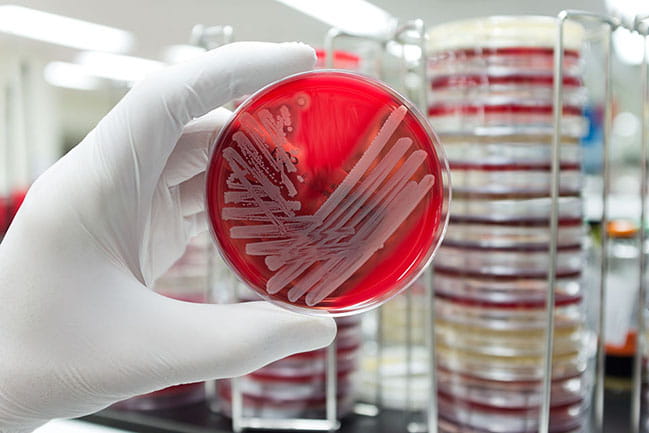